Home » Blog » The Future Of Email: Is There Anything Better?
× Share this Article

The Future Of Email: Is There Anything Better?

For many of us, email is a frustrating necessity of life. For others, like John Pavlus of Fast Company, 'email is the most reviled personal technology ever.' In a hilariously pointed article, Pavlus quotes Don Norman, author of the book The Design Of Everyday Things, as saying that the email is 'the office memo turned cancerous, extended to home and everyday life'.

Among Pavlus’s email pet peeves are: the time spent waiting for replies (email is 'a faster, cheaper fax machine'); the fact that it’s not specifically designed for one purpose and therefore has no single thing that it’s particularly good at; and the clutter, confusion and potential for constant interruption that even innovations like Gmail’s threaded conversations were unable to fix.

Aside from these relatively minor annoyances, email can also be harmful to your health. A 2016 study by the London-based Future Work Centre showed that there was a 'strong relationship' between automatic email updates and what they called 'email pressure.' Those subjects who experienced higher levels of email pressure were likely to see both their work and their home life negatively affected.

Thinking Outside The Inbox 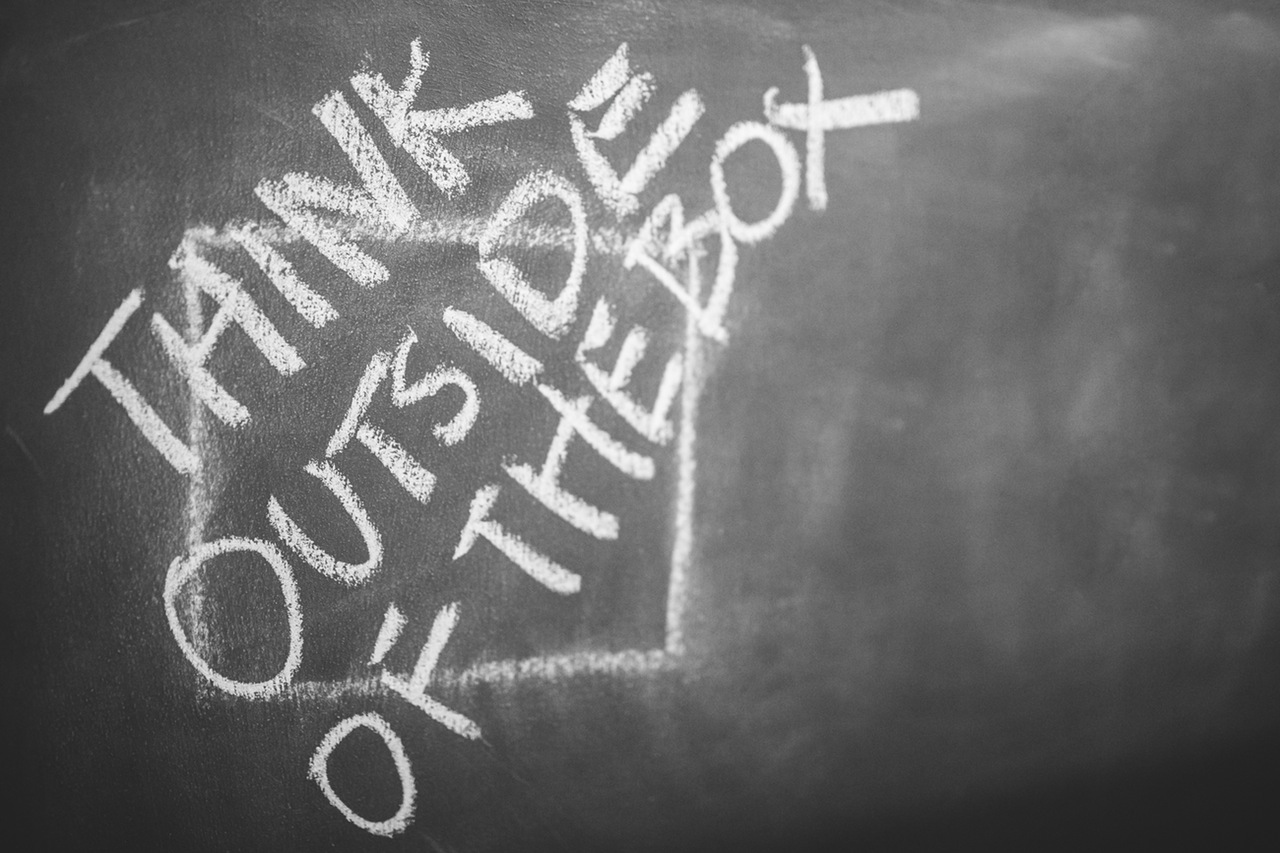 Image Source: Think Outside the Box by Kaboompics CC0 Pexels

So we’ve established that email is irritating, unwieldy, time-consuming and can pose a real danger to our health. Why do we still use it?

Well, many companies don’t anymore—at least internally. Online collaboration tools like Basecamp, Slack and Asana are making life easier for workers the world over by keeping all the data they need in one place and enabling virtual team communications, eliminating the need for tens or even hundreds of emails per day. Chances are you’re at least a casual acquaintance with one of the aforementioned systems.

For many salespeople, however, email is still the default means of communication when it comes to contacting potential clients. Why is this the case? For Slack founder Stewart Butterfield, the answer is simple.

'Email is the lowest common denominator,' he told The Verge in 2014. 'It’s the way you get communications from one person to another. There isn’t really an alternative. Sometimes people will have Facebook messenger turned on, but 99% of the time, if you’re sending a message to a human you don’t know well, you’re using email.' 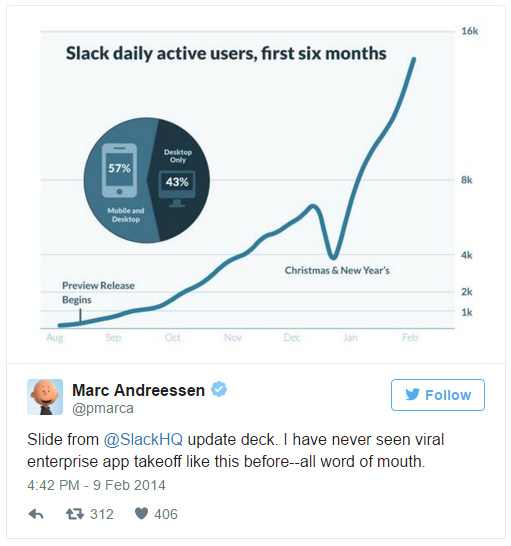 Image Source: Slide from Slack Tweet in The Verge

If, as Butterfield suggests, there is simply no better means of external communication than email, perhaps changing the way we look at the email itself might ease some of our frustrations. As Max Altschuler of Sales Hacker points out, email effectively took the place of the letter as a means of written communication—and so people took the same approach to emails as they had to their letters, including formal salutations and closings.

This style is fast becoming anachronistic in the era of the text message and social media, where messages tend to be short and to the point. Altschuler says it’s time to completely recalibrate the email:

'[O]ne of the most prevalent arguments I’ve heard as a salesperson from other salespeople is, ‘Make emails short and concise so someone can read it with the flick of their thumb on their smartphone.’ OK, that sounds like a text message, right? Then shouldn’t our emails start talking the form of texts and not letters?'

If you can, use social media to gauge how you should approach the person. You may well be able to ascertain from their use of language what tone your email should strike. Mirror the approach they use: if they seem fairly formal, err on the side of caution and take a formal approach yourself, at least initially. If, on the other hand, someone is using a chattier, more informal tone, don’t be afraid to adopt that approach yourself.

Do keep things respectful, though, especially when you’re first contacting someone. 'Always use “hi and bye” in an email to someone you’ve never spoken to before,' says Altschuler. 'Feel them out before you take it to a more casual place. After a few emails with the same person, there’s no need to say ‘Hi [NAME] anymore either.'

And one more thing—don’t use an emoji until the client does. An ill-judged smiley face can be a huge turnoff.

Is There Really No Alternative?

Turning the email from a letter into a text message is all well and good, but it still leaves us with the problems we’ve mentioned: the unwieldiness, the lack of immediacy, the cluttered inbox. Is there really no alternative outreach method available?

'The bad news is that, because email is so ubiquitous, idiot-proof and just plain useful, there will never be a ‘solution’ for its shortcomings,' says Pavlus. 'Email is just too many things to too many people, all at once, everywhere.' For those seeking another way, this seems a depressing outlook indeed.

But perhaps the answer lies in Butterfield’s explanation of the thinking behind Slack. Butterfield realised that people are increasingly staying in contact with different people using various diverse platforms—and there’s no reason why you can’t do the same with clients.

'[M]ost people now have different subsets of contacts they don’t communicate with primarily through email,' Butterfield told The Verge. 'I use [Google] Hangouts with three people, and iMessage with four to five people, and Twitter for a few people, and a much smaller group of friends with email. It’s not something people are conscious of… People are getting more and more used to it… People are willing to accept one more framework.'

This growing acceptance of various means of technology means that clients are likely to be ever more willing to establish a relationship via social media. LinkedIn, Twitter and Facebook all have the potential for client interaction—and they offer the succinctness, informality and immediacy that email simply doesn’t.

Back To The Future

Of course, there is one alternative to email outreach that is immediate, personal, to the point and, most importantly, proven to work: the humble telephone. As Stuart Leung of Salesforce Blog notes, even the best targeted sales email is no match for a sales pitch over the phone. 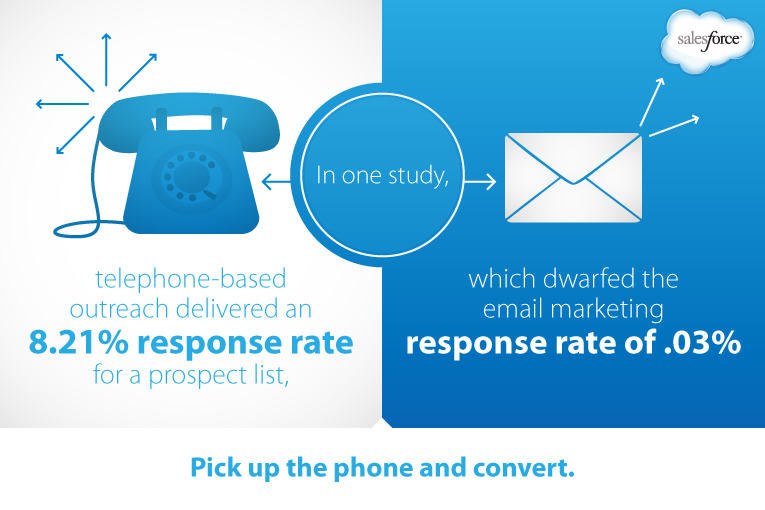 Image Source: Pick up the phone and convert by Salesforce

'Typically, a phone call will get someone’s attention much quicker than an email, and you’re able to customize your sales pitch,' says Leung. 'With email, you’re stuck making guesses at what the most likely customer pain points could be. With actual, real customer interaction, you will be able to pinpoint the problem by asking specific questions, and offer the prospect a solution. This is one of the many ways that email can never replace human interaction.'

So the good news is, there are options for salespeople who want to take their outreach off email—or at least wish to take a fresh approach to emailing clients. As for the future of the email itself, although it is being supplanted in the office by online collaboration tools, it remains an imperfect but essential means of communication. 'It’s got decades left at least,' Slack founder Butterfield told Fast Company, predicting the medium would finally be obsolete 'maybe by 2080.’ 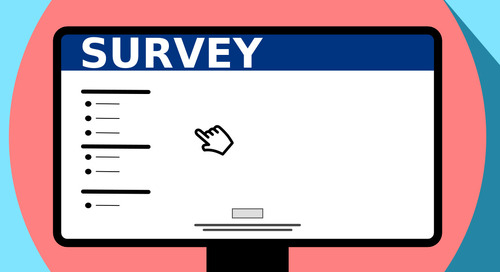 How To Use Customer Research Surveys To Build Realistic Personas

Believe it or not, your customers know a lot about you. Before they engage with you – before they pick up t... 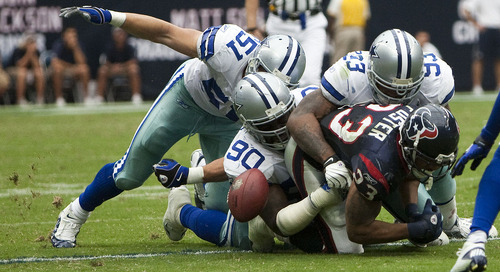