Comparing the Tech Stacks of the Alexa and Fortune 1000 Websites

It should be no surprise that the sheer size and scope of the Internet is having a transformational impact on business. Currently, there are 3.3 billion people online, which is a mind-boggling number except when you realize that more than half the world has yet to join. Last year alone, 250 million new users (roughly the population of the United States) gained Internet access.

These users represent a huge opportunity for brands. For large companies to continue to grow they need to reach new markets. These users are coming online in places like Asia Pacific and Latin America. These are the future markets of global businesses.

To reach them, enterprises are leveraging cloud services. In fact, in a recent survey, 72% of executives stated that the cloud was essential to their strategy. Yet what stage of the cloud migration a company is at has created a division between legacy enterprises, like CVS and Ford, and hyper-growth companies, like Google and Amazon. And that can impact growth.

Conventional wisdom would state that the web-native companies, like YouTube, who never owned their own infrastructure would use considerably more cloud vendors than more traditional enterprises. We decided to check.

Using our technographic data set, we have reviewed the tech stacks of both the Fortune 1,000 (1K), the largest U.S.-based companies by revenue, and the Alexa 1,000 (1K), which are the domains with the most web traffic. We wanted to see what services these companies were using, what similarities emerged, what differences became obvious and what all of that said about their ability to maximize the Internet opportunity.

Where the online money is made

It was not surprising to discover that companies within the Alexa rankings used considerably more content delivery networks (CDNs) and advertising networks than those on the Fortune 1000. Companies with high traffic make their money online and so they do everything possible to maximize every dollar. Many larger enterprises, like Exxon Mobil, which ranks #2 on the Fortune 1000, doesn’t have a huge e-commerce play (unsurprisingly). It’s website represents reputation more than a store front. So it doesn’t need to invest in a CDN or an Ad network. This was a common trend.

In fact, nearly half (48%) of the Alexa 1000 companies use a CDN compared to only 18% of the Fortune 1000. While there was a major discrepancy in the amount of companies that used a CDN service there was agreement in who were the major players.

While Akamai and Amazon CloudFront owned the vast majority of the market share, there was a lot of diversity within the next tier of providers for the Alexa 1K. The below chart shows that Fastly CDN (42), EdgeCast (41), CloudFlare (26), and MaxCDN (14) are all used by more than 10 companies. We should note that the following graphs only represent the top 5-10 vendors in each category covered.

Yet, within the Fortune 1K, no other vendor, besides Akamai and Amazon CloudFront, was used by more than 10 companies.

It will be interesting to watch the adoption of CDNs over the coming years as more and more enterprises invest in their e-commerce platforms.

This trend remained the same with advertising networks: while the Alexa 1K used more than twice as many advertising network vendors than the Fortune 1K (659 vs 316), both groups of companies had the top two vendors, Google (Google Adsense and DoubleClick Conversion, respectively) and Yahoo (Right Media), while the Alexa companies had a wide range of additional vendors as well: 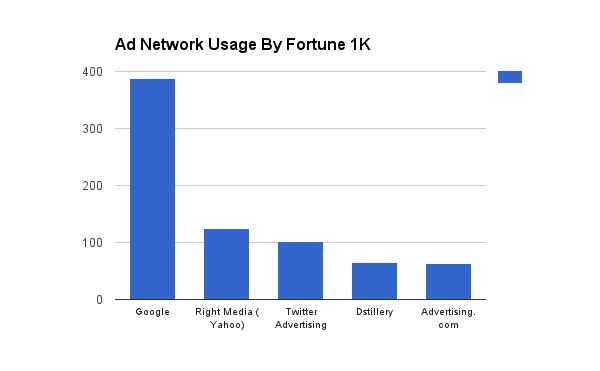 There were some technologies that were more highly adopted by the Fortune 1K than the Alexa 1K. Most notably these included marketing automation (18% vs 10%) and load balancers (70% vs 66%). While these aren’t huge differences, it does nicely illustrate the priorities of Fortune 1K companies. Massive corporations tend to have diversive product lines sold across multiple channels and so the need for marketing automation software makes a lot of sense. Additionally, these companies have spent years building up brand reputations and, even though they are US-based, have global customer bases and so something like load balancing, which can distribute traffic across multiple servers, makes total sense.

What is interesting is the battle between vendors. The three most popular marketing automation tools for both the Fortune 1K and the Alexa 1K are Marketo, Eloqua and Pardot. Yet who is most popular depends on each list.

This difference in vendor was also evident in load balancers.

When it came to Analytics, Google was once again dominant. Google Analytics and Google Universal Analytics were the two most used technologies in both the Alexa 1K and the Fortune 1K. What was interesting, however, was the differences in the next most often used and the fact that many, many different technologies are used for analytics. In fact, within the Alexa 1K more than 80 different technologies are used for analytics and within the Fortune 1K more than 50 are used.

Examining the tech stacks of both list of companies reinforced our previous assumptions that the companies that have the highest traffic prioritize their online infrastructure and use a wide variety of cloud-based vendors, while Fortune 1K companies tend to focus on the areas that directly impact their more traditional business models. It will certainly be fascinating to pull this data a year from now and see if there are any major changes, as the opportunity of the Internet becomes too difficult for any company, Alexa or Fortune based, to ignore. 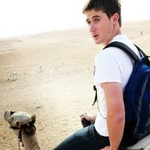 Sam is the director of marketing at Datanyze. He's a big John Hughes fan who occasionally fills the DZ office with the sweet sweet sounds of 90s rock giant, Creed. 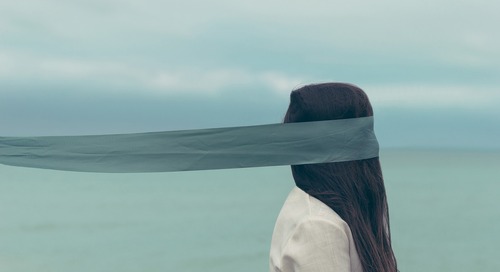 Blind Hiring For Sales Recruitment: The Future Or Just A Fad? 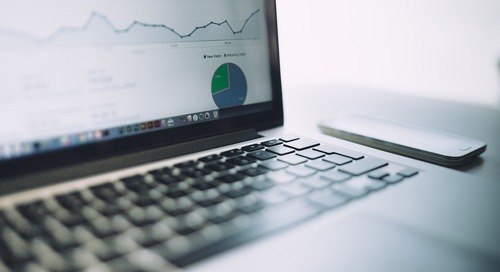 'What gets measured, gets managed.' Austrian-American management consultant and author Peter Drucker is oft...