Home » Blog » Bite the Bullet: Science Says Bullet Points Make Presentations Fail, So Do This Instead
× Share this Article

Bite the Bullet: Science Says Bullet Points Make Presentations Fail, So Do This Instead

It used to pretty easy to find advice on how to make your next PowerPoint presentation more effective by using bullet points correctly. Surprisingly, it still is. Bullet points are standard fare in presentations.

Turns out, speakers think bullet points are easy for audiences to understand - because they’re easy for speakers to use.

In fact, bullet points are a barrier to understanding. It’s time to find an alternative.

Why Do We Even Use Bullet Points?

Mainly, we use bullet points because they allow us to present textual information in small packets. When you’re reading, bullet points are useful because they emphasize clarity and concision. There’s fewer connectives, less fluff, less argument - just the facts. When people need to know a bunch of stuff before they can understand your point, you don’t want to waste precious resources like their attention, patience and resistance to the ‘TL;DR effect’ on stage-setting. Bullet points are perfect for this.

So when presentations became commonplace, people sagely advised each other that using bullet points would make slideshows easier to understand and remember. In a way, they were right - compared with a slide that’s crammed with 12-point text, bullet points are a step in the right direction, after all.

Why Shouldn’t We Use Bullet Points In Presentations?

Because you don’t read a presentation. When you look at the slides on a presentation, someone’s speaking. You’re part of a conversation, processing what’s being said to you, thinking about it, comparing it with other things you already know and making sense of it. If the speaker knows their stuff, you’re probably being told a story, because that’s the most effective way to emotionally engage an audience and ensure that your message is remembered.

The trouble is, for that to work, your attention has to be more or less undistracted. Think of a story you know well - maybe a movie your kids insist on watching every day, or something from your own childhood. Music and images actually make the story more memorable, when they’re used right. They don’t distract from the story - but text does.

That’s because your brain processes verbal information the same whether it’s written down or spoken. More detail on that comes from Dr. Chris Atherton, who’s a lecturer in psychology when she’s not being a user experience consultant for Skype.

‘If you show a lot of text on the slide, people will skim read it and get to the end much faster than you can possibly talk through that information. And consequently, there’s this issue of a divorce between what you’re saying and what they’re reading.’

Why Your Brain Doesn’t Like Bullet Points, According to Science

It’s kind of like starting a car is harder than just running the engine, or taking off needs more fuel than just flying level: every time you switch tasks you’re using up a finite amount of cognitive power. You’re making yourself functionally dumber.

So when you try to do two verbal tasks, you’re going to fail hard at both - you’ll forget the presentation and the bullet points. If you remember anything at all, it’s likely to be unpredictable and irrelevant. Dr. Atherton says we shouldn’t be too quick to blame PowerPoint, even if there are some much more visual and intuitive alternatives out there: it’s ‘probably not evil,’ she says. It’s just being used wrong.

Working Memory and Your Presentation

Even if transmission is perfect and the presentation is as good as it could possibly be, we’re not all that good at remembering new information. In fact, it’s another thing we tend to suck at. At best, we’ll usually remember between 4 and 7 new pieces of unrelated information, though some people will recall slightly more.

That’s down to the way working memory -short-term memory, our equivalent of RAM - operates. Some working memory will be absorbed by the intrinsic difficulty of the task. If your presentation is on some abstruse physics or complicated stats analysis, this is going to be a high score. If you’re selling a freemium Gmail plugin, how intrinsically hard is it to understand what it does? Much of it will be decided by how you present the information.

Finally, you have a couple of slots for non-task-related functions, i.e., staring out the window, and schema building, creating a story about the new information and linking it to what the audience already knows.

Of course, ideally your audience would all have fantastic memories and think the world of you, your presentation and your product. So how can we get audiences to do that?

We can try learning from people who can already do it for themselves. People like Gianni Golfera, Italy’s ‘memory man.’ Golfera can remember 1000-word lists of random numbers, whole books, random strings of numbers and more. How? He uses images, forms emotional connections and establishes links between different pieces of information.

In fact, here’s what Dr. Atherton and Golfera agree on:

Dr. Atherton compares new information to baubles and pre-existing knowledge to a Christmas tree; Golfera suggests memorizing the number 2 by making it your grandmother’s talking pet swan. Neither of those really sounds like it’s going to wow leads, but both illustrate the point.

How to Make Audiences Remember Your Presentation - and Like It

What’s needed is a way of doing for an audience a simplified version of what Golfera does himself. We need to make information cohesive so it’s easier to remember, link it to what audiences already know and build it into a story with emotional resonance so they remember it. Ideally, that emotional resonance will be positive. Audiences would remember hating you, but that’s not a great outcome. We want positive emotional connections.

How do we get those effects? Ask Sebastian Kerbach, Martin Eppler and Sabrina Bresciani. They carried out an experiment to find out how different ways of presenting the same information could deliver different results in a presentation.

Here’s what they found:

‘Subjects who were exposed to a graphic representation of the strategy paid significantly more attention to, agreed more with, and better recalled the strategy than did subjects who saw a (textually identical) bulleted list version.’

So anyone who gives a presentation should avoid bullet points and use graphics instead. Leslie Belknap of Ethos3 recommends presenting only one idea per slide, and if multiple ideas must be on the same slide, design the presentation so that the audience encounters them sequentially. Otherwise, you’ll be back in Dr. Atherton’s trap, with your audience task-switching between reading the slides and listening to the presentation.

You can dodge that by walking them slowly through each new piece of content so it’s fully digested before you move on to the next piece.

Belknap also strongly recommends avoiding text altogether on slides. It’s like the ‘chunking’ effect we talked about earlier - what you want is for the slides and the spoken content of the presentation to form a cohesive whole so the audience takes away a cohesive understanding of the concepts you’re presenting.

But there’s more. Using graphics as opposed to bullet points had other effects too. Again, I’ll let the Kerbach team speak:

With only that change - switching out graphics for bullet points - audiences thought the presentation was better, and so was the presenter. Doesn’t that sound like something that’s worth chasing? 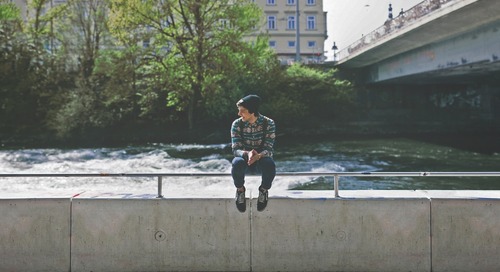 The first wave of millennials - those born from the early 80s and on - are now well established in the work... 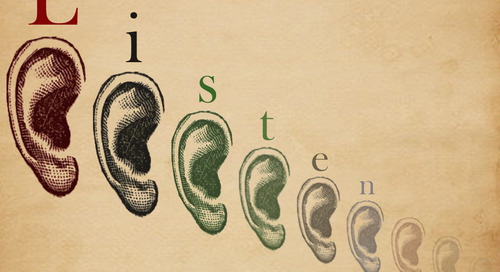 How Active Listening Can Clinch A Sale

“Listen more than you talk,” said Richard Branson. “Nobody learned anything by hearing themselves speak.”