'The next hot thing in sales will be content selling. The industry is excited about content marketing, rightly so. Content selling is next. In the future, a great piece of content will outsell an average sales rep.'

If you’re a sales professional, the chances are you’ll already know about the importance of content selling. But you might be at a loss as to how to go about doing it for yourself. Here, we’ll look at how to turn marketing leads into qualified sales leads, how to leverage existing content, and what type of content you should share.

Sales and marketing tend to be at cross-purposes, and content is often the sticking point, with two different approaches rubbing up against one another. '[T]he disconnect between sales and marketing has never been more real,' says Amar Sheth of Sales for Life.

'Marketers cite reasons of awareness, visibility and branding as the primary reasons to share content,' continues Sheth. 'When it comes down to it, sales only really cares about one thing: achieving/overachieving the quota.'

With these two different sets of priorities at play, it’s not always easy to work out which marketing leads can be converted to qualified sales leads. Antipathy between the two sets of departments doesn’t help. Salespeople often feel that marketing’s priorities are foggy and unfocused, while marketing feels that sales is a cynical environment where the end justifies the means far too often.

This confusion about each other’s role in the business means a lot of potential sales leads can be lost. 'These tribes have traditionally had only vague ideas about what each other are doing,' writes Roger Kay of Forbes. '[B]usiness is lost when they don’t work together well.' 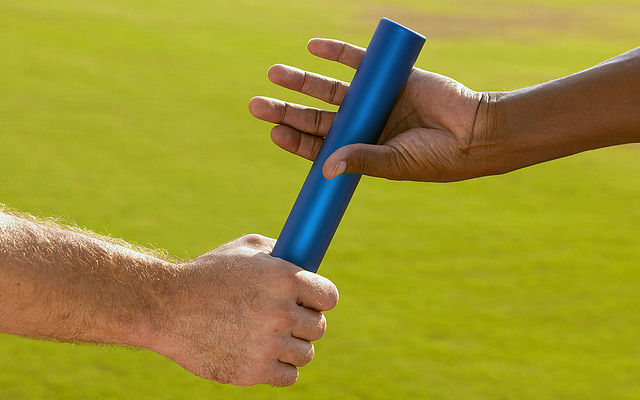 The baton can be passed on from marketing. For a lot of companies, 'Sales Development Representatives (SDRs) have one exclusive focus: to review, contact and qualify marketing-generated leads and deliver them to sales account executives,' says Miller. 'Put simply, SDRs pass the baton from marketing to sales.'

That’s not the whole story, though. In some sales organizations, SDRs take on prospecting too and they’re passing on leads they’ve discovered and qualified by prospecting and outreaching.

Where SDRs handle prospecting and qualifying they’re taking over a task that was previously a second-rung obligation for salespeople - sales want to sell, and prospecting doesn’t generate commission or close deals. Where they support lead transition from marketing to sales SDRs are doing something that just wasn’t getting done before and was a significant revenue leak as a result. The mix will depend on the organization’s offerings and goals, but the contribution of SDRs to growth and revenue is undeniable.

Having an SD team is pretty standard for sales departments now, especially in startups and SaaS businesses where their capacity to fuel fast growth is proven - so much so that David Cummings calls SD the ‘most important sales process innovation in 10 years.’

Leveraging content is one way in which the SDR can convert a marketing lead to a sales lead. One growing practice is where marketing has set up gated content—for example, the customer can download a whitepaper or an ebook in exchange for their email address. Rather than getting funnelled into an automated marketing email chain, the SDR picks up on the lead and emails them directly from an individual salesperson’s email account.

So far, marketing has owned the content: all sales has done is intercept and pick up the lead. But in order to retain and build the relationship they’ve just begun, the SDR will usually offer more content. This could take the form of another white paper, or ebooks, guides and webinars - high-value content that’s usually regarded as bottom-of-the-funnel. SDRs might also offer something like a demo, or even a meeting, face-to-face or online via Skype.

Essentially SDRs are using content to guide and educate bottom-funnel prospects towards purchase. By doing this, you can separate prospects who are likely to buy from those who are distinctly unlikely to—and thus create a qualified sales lead from a marketing lead.

Optimizing content on social media is marketing’s job, of course. But as a salesperson, you can still use content as a means of contacting prospects. 'What many sales professionals don’t realize is that sharing content isn’t just something you do passively, but [it is also an] effective way to spark real conversations with prospects directly and within your social networks,' says Amar Sheth.

Still skeptical of the effectiveness of content? What about if we told you that, in 2015, a survey by Forrester found that 82% of buyers viewed at least five pieces of content from the winning vendor before committing to the purchase? The evidence is there to show that the buyer is more educated than ever—as a salesperson, you need to quench their thirst for information.

According to myDocket CEO Jason Wesbecher, this is done far more effectively through content than via more traditional methods like cold calling. 'If a warm referral isn’t possible, use content,' he says.

'Use rich media (videos, photos, infographics, animations). Use thought leadership (analyst reports, blog posts by luminaries, news items). Or use something more homegrown and personalized (research their interests and appeal to that)… Focus on teaching the customer something that they otherwise would not have known.'

The accepted wisdom is that LinkedIn is the go-to network for salespeople. While there is no doubt that LinkedIn offers a fantastic way of reaching prospects, a Forbes survey from 2015 perhaps surprisingly ranked Twitter as being more valuable when it came to sales prospecting. 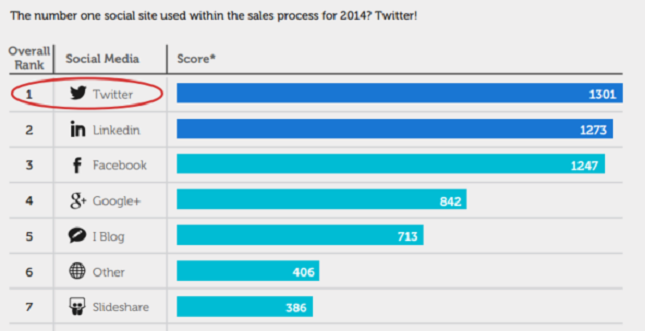 Image Source: The number one social site used within the sales process for 2014? Twitter! by Mark Fidelman Forbes

The reason for this seems to be the relative informality of Twitter when compared with LinkedIn. 'Professionals are more protective over their LinkedIn connections than their Twitter exchanges,' Vanessa Di Mauro, CEO and chief digital officer of Leader Networks, told Forbes. 'I like to describe Twitter as the bar after work—where you keep your tie on but loosen it a bit, and LinkedIn is the conference room in the corporate office.'

So both channels are valid and worth sharing content on. But how do you go about finding the right content to share? If you’re doing your job properly as a salesperson and immersing yourself in your discipline, finding content shouldn’t be difficult—you can simply share what you’re reading yourself. If you’re as up-to-date as you should be, it will be interesting for clients to read.

Another way of finding out what prospects might like to read is by simply asking them. '[E]mail your top five clients and ask them what they read regularly,' says Amar Sheth. 'This research may reveal some obvious sources but it will likely surprise you as well. Once discovered, these sources should become regular reading for you.'

In 2015, the social strategy firm Leadtail studied how salespeople engage prospects on Twitter, analyzing the activity of 595 sales executives during the first six months of that year. They looked at the most popular hashtags as a means of ascertaining the hottest topics among sales executives. The survey, which is a fascinating read, can be found here. And yes, it contains the blend of the obvious and the surprising that Amar Seth forecast. 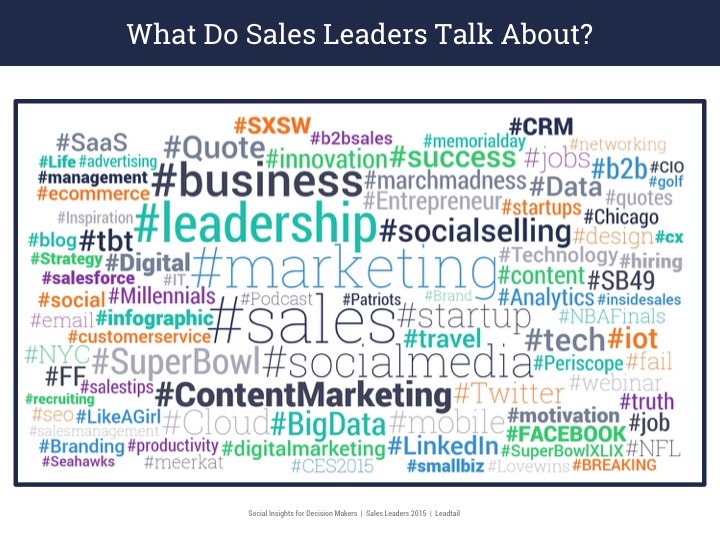 Image Source: What Do Sales Leaders Talk About? by Leadtail

The survey also looked at what publications top salespeople were sharing most. Among the top ten shared publications were Forbes, Inc, Business Insider and The Harvard Business Review. All these organs carry gravitas and are respected worldwide. For Carter Hostelley, Leadtail’s founder and CEO, the lesson was clear: '[S]ales executives are making it a priority to become better business leaders and entrepreneurs, while also staying current on technology news,' he said.

In other words, the best sales executives are seeking to win over prospects by positioning themselves as thought leaders. So search using Twitter hashtags to remain at the bleeding edge of your discipline and share industry leaders on LinkedIn and build relationships with them—your association with them could help you persuade prospects in future.

Above all, don’t forget the words of Jason Wesbecher: 'Content is the new currency of B2B sales.' Spend it wisely. 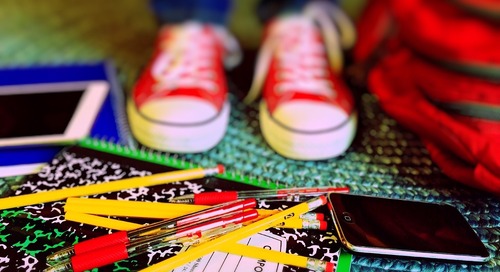 How to Achieve Consensus in B2B Sales

'The group buying mindset is here to stay,' writes Garin Hess, founder and CEO of DemoChimp. 'The Age of Co... 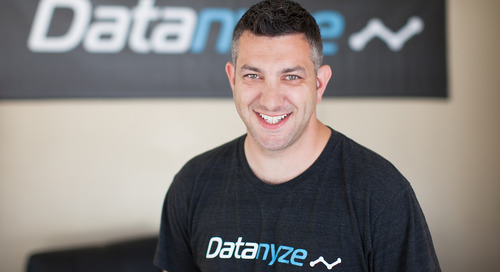 Ben Sardella is co-founder and Chief Revenue Officer at Datanyze. Before that, he was VP of Sales at KISSMe...